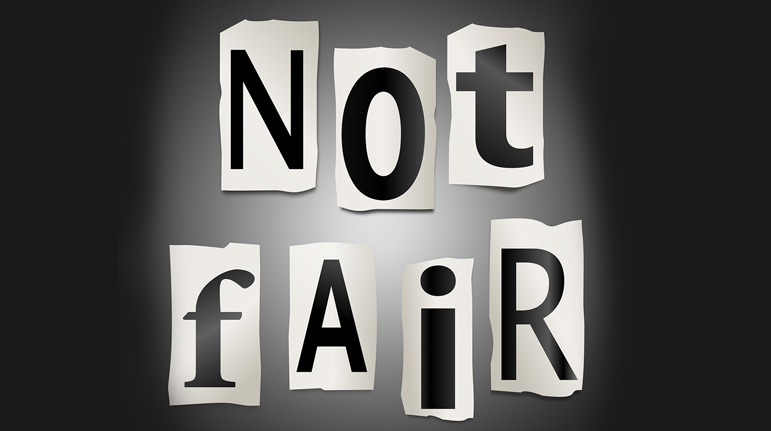 Parshas Hachodesh- It's Not Fair

“And you shall take a bundle of hyssops and dip it in the blood in the basin, and you shall touch it to the lintel and the two door posts, and you shall not go out, no man from the entrance of his home that night, until the morning.” — Shemos 12:22

Great affront to the Mitzrim

After months of witnessing HASHEM’s mastery over nature, the Jewish people were commanded to commit the ultimate affront to the Mitzrim: to take their very god, tie it to the bedpost, and prepare it to be slaughtered on the 14th of Nissan. They were then to take the blood of the korbon and smear it on their doorposts as a sign to protect them. Additionally, they were told that since all first-born Mitzrim were to be killed, no Jew should leave his house that night. Rashi explains that even though blood on the doorpost was a sign that that house belonged to a Jew, if a Jew were to walk in the street, he would be in danger. “Once permission is given to the destroyer to destroy, he doesn’t distinguish between innocent and guilty.”

Where is the justice?

It seems that Rashi is saying that had a Jew remained in his house that evening, he would not have been killed, and had he left his house, he might die – not because he was guilty of any sin, not because he deserved to die, but because once the destroyer is given permission to kill, anyone in his path is in danger.

This Rashi is quite difficult to understand. If someone is innocent, then how is it possible that he would die? The basis of our entire belief system is that there is no power in this world other than HASHEM. We accept that all decisions are directly guided and carried out by Him alone. So how is it possible that someone undeserving of death would have been killed anyway, just for going outside that evening? Where is the justice?

The answer to this question is based on the way that Chazal understand the system of Creation. HASHEM formed this world with definite and distinct laws: heat tends to rise, gases tend to expand, and heavy objects tend to fall. These laws are the bedrock foundation for all of physicality. Just as HASHEM created laws for the physical world, so too, He created laws for the spiritual world. These are specific and exact, and carry throughout Creation.

Before HASHEM created the world, He thought (if it could be) to create it with the middas ha’din – strict justice. However, the world couldn’t exist if it operated according to this system, so HASHEM created the world using the middas ha’rachamim – the system of mercy. The operating principle then became compassion. The way that actions were weighed and people were judged was now with a different scale and measuring rod. However, since HASHEM acts with complete honesty, justice cannot be ignored. It is mitigated and guided by kindness, but it still demands its due.

The Mesillos Yesharim explains that pure middas ha’din would demand instant punishment for a sin. After all, in this world, you are a creation, a visitor in the King’s land, created by and supported by Him. The King gave you laws for your good, and if you have the audacity to violate the express command of the King, even a slight transgression should be immediately punishable by death. The middah of mercy allows for a different way of judging an act: a sinner is given time to repent, the punishment isn’t as severe, and there is a system of tshuvah – of somehow undoing the sin itself.

However, din cannot be ignored, and there are times and situations where it comes into full force. For reasons that we humans will likely never understand, HASHEM runs this world in cycles and time settings. There are times of greater leniency, and times that demand more scrutiny in judgment. We are advised to daven on Yom Kippur with extra fervor because it is a time of greater rachamim. The same amount of regret and tshuvah on our part will accomplish more. The middah of rachamim is in greater force.

This seems to be the answer to the question on Rashi. When HASHEM was taking retribution on the firstborns of Mitzrayim, justice was being served, and so there was a global shift in the middah in operation. Din went into effect. As such, it was a very dangerous time. Now man – any man – would be judged with the system of din, and very few individuals would be able to pass as innocent. Therefore, the Klal Yisroel were warned, “Do not go out from your home.” The destructive angel was given permission to act in a manner different than under normal circumstances. A person who might be innocent under the normal mercy system would now be found guilty and might warrant death. Because of that, the Jews were advised to avoid the situation.

Understanding the middah of din

This concept has great applications to our lives. In many situations, we are tempted to ask questions on HASHEM. “It’s not fair! Why should that person suffer? Why do bad things happen to good people?” Yet when we focus on what man is capable of accomplishing, we understand that there are very few individuals who truly live up to their potential. If the middah of din were exacted, there would be few who would escape unscathed. So, there are no issues of “it’s not fair.” The only question is why in one case it seems that din is in operation more than in another. And because there are so many factors that affect the balance, we humans may never know the answer to these global questions. However, the question of HASHEM’s “cruelty” never applies.

Using the middah of mercy

Even more, these concepts affect our relationship to HASHEM. When we understand what strict din is, we understand that our very existence is dependent upon mercy. We can then tap into one of the most powerful forces in Creation. Even a slight change in the amount of mercy HASHEM uses in judging me can have a fantastic difference in the outcome. The question I have to ask is: how do I awaken the middah of mercy?

One of the keys is to utilize the power of tefillah, to ask HASHEM for help – not based on my merit or anything that I have done, but out of sheer mercy. Another method is to act toward other people with mercy. Chazal tell us that the way that a person is judged mirrors the way he judges others. Since he established the criteria, that itself is justice, and in Heaven that is the scale they use.

Understanding these ideas greatly impacts the way that we approach others and the way we approach life itself.