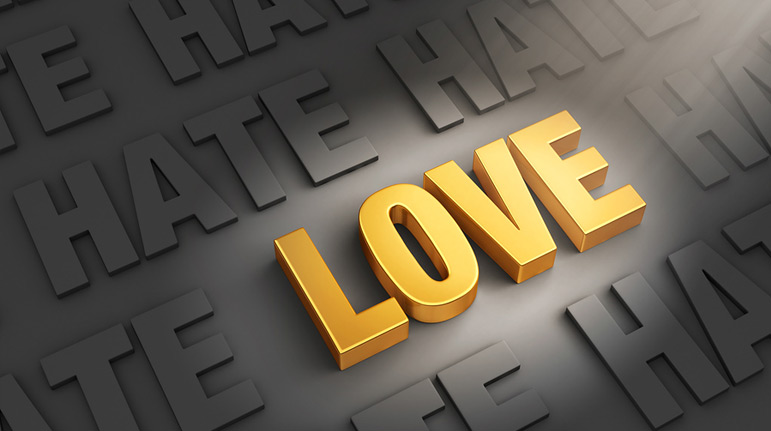 Love Will Conquer All

“And Yaakov approached Yitzchak his father, and Yitzchak felt him, and said, `The voice is the voice of Yaakov, and the hands are the hands of Aysav.’” — Bereishis 27:22

To “trick” Yitzchak into giving him the bracha, Yaakov donned Aysav’s clothing, put the skin of an animal on his arms and neck to simulate the hairiness of Aysav, and went in to his father to receive the blessing. As they were twins, the subterfuge was almost perfect, and it seemed as if Yaakov had succeeded. For all intents and purposes, he appeared as Aysav, spoke as Aysav, and presented himself as his twin. Yet something made Yitzchak suspicious, and he said the famous words: “The voice is the voice of Yaakov, and the hands are the hands of Aysav.”

Rashi explains what tipped Yitzchak off. Yaakov used the equivalent of the word “please,” as in “Please, my father, get up. Please, my father, take this.” These were words that Aysav would never utter. Therefore, Yitzchak suspected that it wasn’t Aysav, but rather Yaakov, and he asked to “feel” the person in front of him to determine which of the brothers it was.

This Rashi is very difficult to understand when we take into account Aysav’s relationship with his father.

No one fulfilled Kibud Av as Aysav did

Aysav had genuine respect and reverence for his father—in fact, he loved him. The Medrash Rabbah that, “In the course of human history, no man ever treated his father with the respect that Aysav treated his father. So how is it possible that he was gruff and rude to a man who he loved and adored?

The answer to this question lies in understanding human nature.

The force of habit

We are engaged in thousands of interactions, choices, and decisions each day. Unlike an animal, which is preprogrammed to perform in a particular manner, the human has free will — free will to choose how he will respond, react, and deal with every situation. If every one of his decisions was a conscious choice that had to be thought out, he would spend his entire day just making them.

A man is approaching. Do I smile and nod or do I look the other way? He’s looking at me, do I turn my head to respond or do I look out at the trees? When he asks me how my day is, does he expect a detailed inventory of actions or does he mean it in a casual manner?”

To allow us to function productively, HASHEM gave us the power of habit. Habit allows us to respond almost unconsciously to the thousands of choices that we are constantly engaged in. As a result, we can talk and eat dinner at the same time. We can drive a car, watch the traffic, change lanes, and hold a conversation. Most of the actions we engage in are done on auto-pilot. We don’t have to think about them. We have done them before, created our patterns of action and reaction, so now we can just go about our business without having to use up our conscious minds on rote activities. Habit governs and controls most of the actions and choices of our day.

This force is a double-edged sword. It can allow us to accomplish worlds more because of it, but it costs us in the sense that bad habits and poor reactions can lock us into behaviors and responses that don’t accurately represent our will. We’re just stuck with them because of the ruts that we have created.

This seems to be the answer to Rashi. There is no question that Aysav deeply respected his father. But Aysav was gruff. His operating mode was curt and rude. Those were the habits that he developed, the manner in which he acted, the patterns that he etched into his soul. Even when he was in a situation of serving a man that he greatly respected, his years of mechanized routine surfaced, and he spoke the way that he usually spoke. When Yaakov impersonated Aysav and used polite terms, it was out of character. Yitzchak noticed something out of synch. This wasn’t the Aysav that he had known for so many years.

This concept is very applicable in our lives on a number of fronts.

I love him, but can’t live with him

It may well be that we respect our parents, love our siblings, and are deeply attached to our spouses, but unless a person consciously works on his word choices, reactions, and responses, he may well be putting on a façade — presenting an image to others that doesn’t accurately reflect how he feels. The message he may be giving is very different from his inner condition.

One of the saddest expressions uttered in a troubled marriage is: “I love him, but can’t live with him.” Often times, it isn’t that the man is a selfish lout or a creep. It is simply that he has remained with the bad habits of being unpolished. “Please,” thank you,” and “excuse me” are lacking from his vocabulary. This can make all the difference in the world between a person who is pleasant to be around — or not. The most amazing part is that these expressions don’t always represent who the person is and how he feels, but the little niceties of life are the grease that smoothes the wheels of social interactions.

While middos are the essence of a person, social graces often speak louder than feelings to those who actually live with him. By training our tongues in these social conventions, we give off a persona that matches our inner condition, and those we interact with get to experience the considerate, caring person that we are.