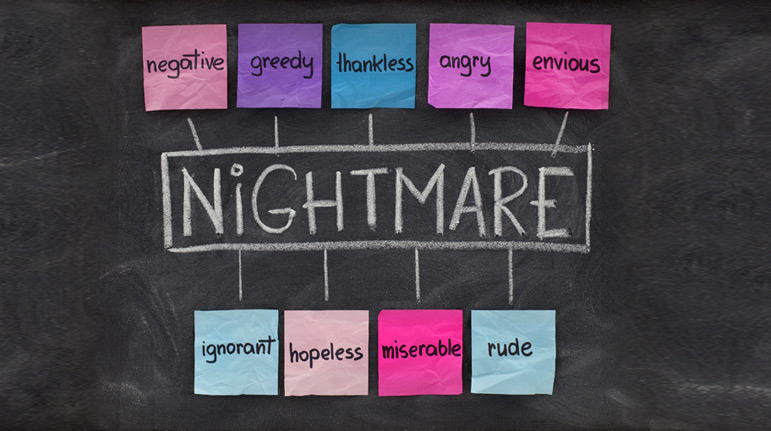 Your Middos Are Killing You

“But as much as they would afflict it, so it would increase and so it would burst forth; and they were disgusted because of the Children of Israel.” — Shemos 1:12

The Jews become the enemy of the state

Yosef, his brothers, and their entire generation had passed on. A new era was beginning in Mitzrayim, and with it came a new attitude. When the Jews had first entered the land, they were received as celebrated guests. After all, they were brothers of the great Yosef who had saved the nation. That sense of appreciation was gone. No longer were the Jews respected and revered, no longer were they welcome. They had become a thorn in the side of Mitzrim.

And it went downhill from there. As has happened so often in history, the Jews were soon viewed as outsiders and as foreigners — unwanted, unwelcomed and feared. That fear turned to hate when the common wisdom said, “If a foreign people shall attack, the Jews in our midst will join them in battle and throw us out from our land.” The Jews had become the enemy of the state.

The only choice was to get rid of them. The first step was to oppress them, then to torture them, and finally to enslave them. Yet, despite the hardships placed upon them, the Jewish nation flourished. The Mitzrim found themselves confounded by this despised enemy within their borders who would soon outnumber them.

Disgusting in their eyes

This Rashi is difficult to understand. How did the Mitzrim’s hatred toward the Jews make their own lives disgusting? Wasn’t it the Jews they hated, not themselves?

The answer to this question can be understood with an observation about human nature.

We humans are highly social. Our interactions are governed by many subtle cues and conventions. One of the skills needed to get along well with others is the ability to know how they perceive us, and what they are feeling. Is that guy in a good mood or bad? Is he open to my advances or not?

Most of us do this intuitively. Before we say something, we look at the other person and instantly know if they are pleased or upset, happy or distressed, and we modify our exchanges accordingly. Many children, however, find this skill elusive, and they must be taught to recognize the physical signs that correspond to different emotions.

One of the techniques used is to teach the child to “read faces.” A therapist will show the child a picture of a person’s face, and then help him or her identify the emotion that that person is most likely feeling. “See, when the end of the mouth curves up, that’s a smile, and it means he’s happy. When his forehead crinkles up, and his mouth moves down like that, it means he’s angry.”

While most feelings have distinct physical appearances and are easy enough to distinguish, there are two that are remarkably similar: anger and hatred. In both, the person’s face shows displeasure. In both, the person looks genuinely unhappy. And in both, the person seems to be in pain. As a result, teaching a child which face represents hate and which represents anger is very difficult. One thing is clear, though: neither face is smiling. Because both anger and hatred aren’t satisfying, enjoyable experiences. Quite the opposite, they are dramatically unpleasant.

The Gemara (Pesachim 113b) tells us, “If someone is accustomed to anger, his life isn’t a life, and he is never happy.” Why is this? Because powerful emotions are like a gas that spreads till it fills whatever container it is in. When a person is enraged, his entire consciousness is consumed. He can’t think about other things. He can’t concentrate on other ideas. The flames of anger occupy his entire mind.

And he suffers. He suffers with an incurable, burning pain that wells up within him, stealing his attention and eclipsing all other sensations. And so, he can’t enjoy the food he eats. He can’t appreciate music or poetry. All of his wealth and possessions are for naught because he can’t find the peace of mind to enjoy them. He has ruined his life.

When I hate you, I suffer

This seems to be the answer to this Rashi. The Mitzrim were consumed with a hatred of the Jews. They walked around with a tape playing in their brain, “I HATE those Jews. Those slimy, ugly Jews! They are despicable. They fill me with RAGE!”

And it wasn’t once or twice a week that the Mitzrim had to see them. “They’re everywhere! In the marketplace and in the bathhouses! In the stable and in the barn! Each morning when I walk to the river, I see them. UGHHHHHHHH! I CAN’T STAND THOSE VILE JEWS!!!

And so all day long, they were racked with burning feelings of hatred, animosity, and disgust, till their very existence became a misery. The Mitzrim destroyed their very lives.

This concept is eye-opening. Many mitzvos focus on developing our character traits. We often think of these as ways of making ourselves into better people. They make us easier to get along with, more pleasant company. While this is true, there is another benefit: I am more at peace with the world and with myself. And as a result, I am happier.

The ways of the Torah are pleasant. When a person follows them properly, he becomes more giving and caring. He learns to overlook others’ flaws, and he becomes more patient and calm. By doing so, he becomes greater, he earns his portion in the World to Come, and he enjoys a better life in the here and now.