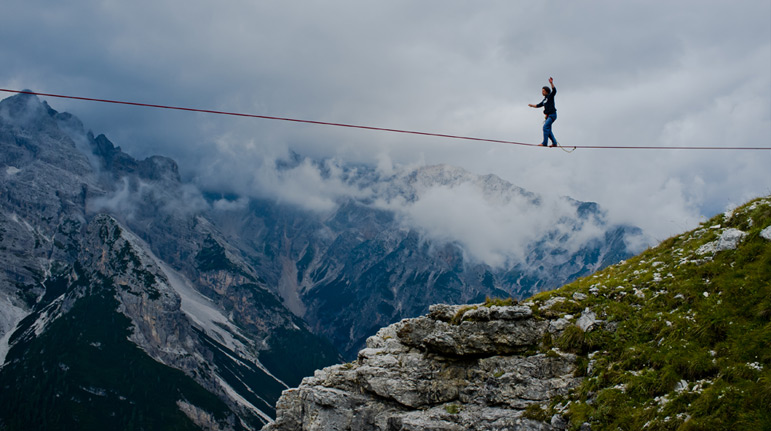 Hishtadlus and Bitachon- Finding the Balance

“This is how you should make the ark: three hundred amahs long, fifty amahs wide and thirty amahs tall.” Bereishis 6: 15

HASHEM appeared to Noach and told him that the world had turned to wicked ways, and it was to be destroyed by a flood. HASHEM commanded Noach to build a tayvah (an ark) so that he and his family would be saved.

The Torah then lays out the dimensions of the ark in exact detail: the length, the height, the width, and the material it was to be made from. The commentaries ask: why do we need to know the exact dimension of the ark that Noach built?

All the animals couldn’t possibly fit into the Tayvah

Rabbenu Bachya answers that the Torah delineated the size of the tayvah to teach us a lesson. Assuming that an amah is a measurement of approximately two feet, the entire construction was not large: 600 feet long, 100 feet wide and 60 feet tall. When we put those dimensions into perspective, it becomes obvious that all of the animals in the Creation, could not possibly fit into such a small area.

Noach was commanded to gather up every species of living creature – from the gorillas swinging in the trees to the cows eating the grass, from the birds flying in the sky to the reptiles creeping on the ground each was to be represented on the Tayvah. So many animals could not possibly fit into so small a craft. Even fifty such Tayvahs couldn’t house all the animals in existence, let alone the food and supplies needed to support them for almost a year’s time.

Rabbenu Bachya explains that Torah described the dimensions to teach us a pivotal concept: Man must act in the “Derech HaTeveh,” the ways of the world. Man is commanded to do that which is in his power, and only when he has exhausted all in his means, is he allowed to rely on a miracle. Noach couldn’t possibly have built a vessel large enough to house all living creatures. Yet he couldn’t just do nothing. He was commanded to do as much as he could, and only then rely on the miracle to fill in the rest.

Operating principle in our lives

Our Hishtadlus (our efforts) and our Bitachon (our trust in HASHEM) have to be balanced. A person must use the Derech HaTevah, acting as if my efforts will determine the outcome, all the while knowing that everything is entirely controlled by HASHEM.

But finding the balance between proper Hishtadlus and Bitachon is very difficult. Invariably, we either put too much stock in our efforts, our business acumen, and our abilities to get things done… or we act irresponsibly in our Hishtadlus, saying, “HASHEM will provide,” even though we haven’t put in adequate effort. The proper balance can be better understood with a Moshol.

When the tightrope walk was first introduced to the circus, it was an exciting act to watch. A highly skilled acrobat would perform devilishly frightening dance steps while walking on a thin wire suspended high up in the air. However, everyone knew that the danger was limited. Even if the performer slipped, there was always a safety net below to catch him.

Somewhere in course of circus history, the net was eliminated. Now, the acrobat was asked to walk the same distance and perform the same feats, but with one distinction: if he were to fall, there would be nothing there to catch him.

Imagine the electricity in the air the first time that act was performed! There was the tight rope walker, doing the same act that he’d performed thousands of times before, but now one slip, one misstep, and he’d fall to his death on the concrete below. No matter how many times he’d walked the high wire before, this time was different. He was galvanized by the excitement, exhilarated by the danger.

That is an apt parable to our Hishtadlus. We have to go about life like that tightrope walker, taking our efforts very seriously, and acting as if the outcome is completely dependent upon them. Our attitude has to be, “If I don’t put in the adequate exertion I will fail and fall to the concrete below.” All the while, though, we must know that there is a safety net. HASHEM is there to help and support us, and even more, HASHEM completely directs every action in our lives. This is the proper balance that we need to strike between putting in our own efforts and trusting in HASHEM’s close involvement.