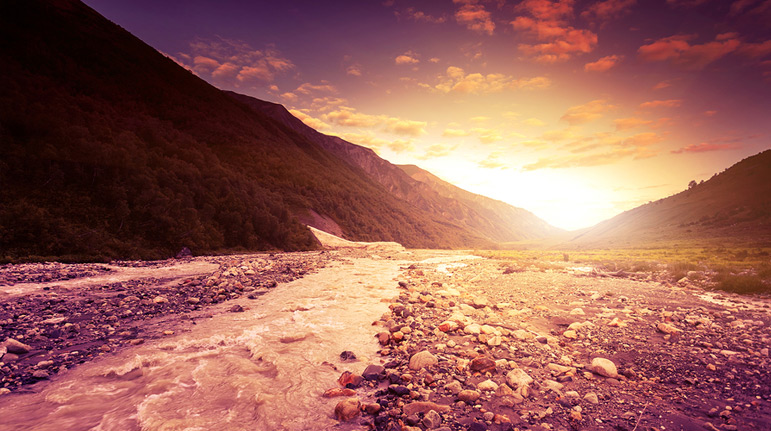 A Glimpse into the Upper Worlds

On his last day of life, Moshe Rabbeinu addresses the Klal Yisrael. After a thorough explanation of the vast rewards and ghastly punishments that hinge on the choices made, he offers a final note: Let the heavens and the earth bear witness.

Rashi explains that Moshe was giving them a tool to help them stay on the proper path. “Look at the heavens and the earth did they change their ways? Did the sun ever say, ‘I won’t rise this morning?’ Did the ground ever say, ‘I won’t produce?’ Or did it say, ‘I will grow wheat instead,” when you planted barley? As they dutifully follow Hashem’s commands, so too should you.”

What possible lesson can we learn from the sun and the earth? Of course they follow Hashem’s commands, they are intimate—they have no intelligence, they have no will, they have no competing desires. They obey because they are objects put into motion. What relevance does that have to man who is always tempted, always pulled, always challenged with choosing between the voices inside of him?

This question can best be answered from a different perspective.

In our modern world we regularly harness forces that our eyes don’t see. No human has ever seen electricity. We can see the burning of impurities in the air as lightening streaks across the sky. But the flow of electric current is not visible. The transducer in our microwave emits tiny waves, causing the electrons to speed up, thereby creating friction that heats our food. We power up a cell phone that emits waves to a tower far away, that then relays signals to a satellite three miles up in the sky, then sends them across the world. We turn on our GPS, and instantly triangulate signals sent from the sky. Our laptops are wireless, our garage openers are remote, and the idea of powering a city on the energy released from the atom is something we are comfortable with. We are quite comfortable operating in a world that is naked to the human eye. Yet we are fully aware that it exists.

These concepts aren’t far off theories—they are real.

If I were to offer you twenty dollars to a key into a wall socket. I doubt you would accept my offer. For while you may never have seen the flow of electricity, you are quite certain that this will end badly.

While we are sophisticated in that manner, we remain ignorant of others. The Rambam tells us that every physical entity, live or inanimate, has a spiritual entity guiding it, directing it. Chazal tell us that no blade of grass can grow without a moloch telling it to grow.

Relating to the Dor De’ah

This seems to be the answer to this Rashi. The Jewish People then were on the highest spiritual level of any generation. They experienced all of the miracles in mitzraim. They lived through the splitting of the sea. They were there at the foot of Har Sinai, when Hashem spoke. The heavens were opened up and they witnessed things that no other people saw.

And so they had an understanding of the ways of the world that we don’t. As we know electricity exists, they knew the spiritual counterpart exists. To them it was real.

And so Hashem said to them, “Look at the sun,” it is guided by an intelligent spiritual force. That force is an independent entity– it has its own will  – and so, it could choose to disregard My directives. But it doesn’t. It recognizes that every command I give is for the good. So it obeys. As do all of the forces that guide the physical world. Not because they have to, but because they understand. So to should you understand that every mitzvah helps you grow, and every sin damages you. Learn from the wisdom of the sun and the earth, and don’t veer off the path that I have set for you.

Man’s Position in the Cosmos

This concept is relevant to us in the sense that every once in a while it is important to move out of our limited perspective, and look at the vastness and complexity of this world. Whatever our physical senses perceive, is but the tip of the iceberg, the spiritual world is far more densely populated, and far more complex. There are worlds and worlds in the spiritual dimension—and all of it is dependent upon man.

Hashem made the heavens and the earth for man. But it wasn’t just the physical. Hashem Created man in His image. Hashem made man is a little creator. There are worlds that are dependent upon on him. His choices either elevate those worlds, or destroy them. He is the pivot of existence. If he acts as he should, the world itself is elevated. If not, the world itself is damaged.

Man is the steward to creation. He is responsible for the world status and existence. But not in the mundane sense of the ground and the rivers, a glorified park ranger.

Man is the Steward to Creation

Hashem created man and made him steward to Creation.. Hashem made man

Chazal tell us that on Rosh Hashana, when Hashem judges the world the molochim tremble. They tremble because their existence is being decided. If man As man goes, so goes the world.

If we were aware of our importance and significance, we would have a very different perspective on the importance of our toughts, words and actions.

We would recognize the entire world is dependent upon us.