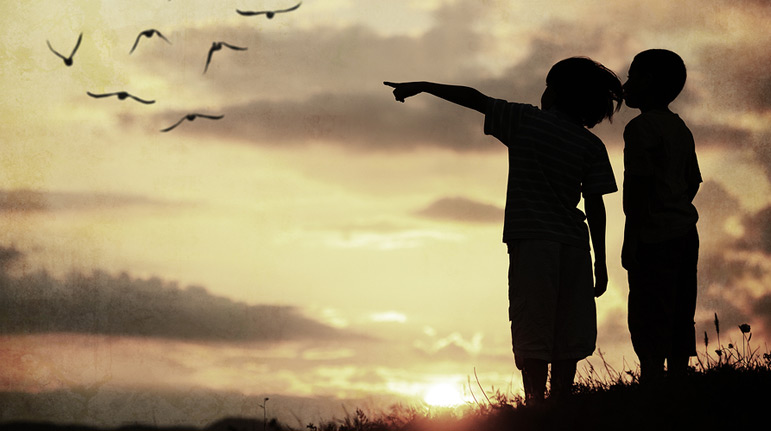 And HASHEM said to Avram, “Go for yourself from your land, from your birth place, and from your father’s house to the land that I will show you.” – Bereishis 12:1

The Making of a Gadol

With these words begins one of the ten great tests of Avrohom. The Ramban explains that these were trials by fire, designed to bring the Avrohom’s greatness to the surface, taking it from the potential to the actual. They helped form him into the singular tzaddik that he became.

Rashi notes that in this test, HASHEM is very expressive about the place where Avram is leaving from, but fails to mention where he is to go to. “Leave your land, your birthplace, your father’s house, and go. . .” Rashi explains that this was all part of the test,   and added to the reward he would receive when he passed. Each description of where he was leaving from increased his longing and attachment to it, making it more difficult. Not telling him where he was going to made it even more difficult because now he had to blindly listen to HASHEM. Rashi continues that this is similar to the akeidah when HASHEM challenged Avrohom: “Take your son, your only son, the son that you love.” Each phrase further increased the test because it highlighted and stirred up the love Avrohom felt for his son. So too here: “your birth place, your homeland…”

When we focus on who Avrohom was, this Rashi is difficult to understand. The Avos were spiritual giants, men whose feet may have been on the ground, but who lived up in the heavens. What difference did it make to Avram where he was leaving from? He didn’t really exist there; he lived in a world of spirituality, barely cognizant of his physical surroundings. And what makes this question even more pointed is that it is hard to imagine that Avram was particularly attached to either his birthland or his father’s house.

The home of Terach

There is a well-known Medrash that at a tender young age, Avram recognized the folly of idol worship. He set out to teach the people of his town the error of their ways, but they were less than accepting of his teachings. His father Terach in particular was dead set against them, as he owned a store that sold idols. One day, his father asked him to watch the idols, and when he came back, he found that all the idols were smashed. He turned to Avram and asked, “What happened?”

Avram answered, “Someone brought in food for the idols. One of the smaller ones took it, the bigger idol got jealous, and they had a fight  – punching, kicking, and smashing. This is what is left.”

Terach was not impressed with the cleverness of his son. In fact, he was so unimpressed that he took him to Nimrod the king, who pronounced him an enemy of the state and attempted to execute him. That resulted in another of the tests of Avram: the fire of Ur Kasdim.

This being the case, it is hard to imagine that Avram felt any great attachment and connection to his homeland and his father’s house. So what does Rashi mean that each expression made it harder for him to leave?

The answer to this question can best be understood with a perspective.

Despite this being a very long and difficult exile, we have we have succeeded in creating our own Torah culture. We have our own manner of dress and speech; we have our own goals and priorities. We even have our own newspapers, music, and books. We now even enjoy a vast body of Torah literature. Whether stories of our Gedolim or fictional novels that convey Torah values, it is a great accomplishment and necessary to remaining an exalted nation.

However, there is a small fly in the ointment. It seems that the Gedolim written about in the popular books today are presented as molochim – as if they never failed, never suffered any setbacks, and never went through nisayonos. The average Gadol started learning Mishnayos at age two, mastered Shas Bavli at age 10, polished off Yerushalmi for his bar mitzvah, and then spent the rest of his life reviewing! Never fell. Never questioned himself. Never felt lost or confused. He just knew from a tender young age that he was destined to greatness and followed that path unerringly throughout a lifetime of growth and accomplishment.

The reality is quite different. Every Gadol has suffered. Every great person goes through tests and tribulations. Each of the Avos and Imahos had periods of darkness and difficulties, and on some level, they all failed. The true distinction between those people who became world class Gedolim and those who didn’t is how much they were willing to pay the price, how committed they were to serving HASHEM, how many times they were willing to get knocked down and get back up again. If you find a Gadol story that doesn’t include dark times, you are reading pure fiction. In the world that HASHEM created, fighting fights is integral to growth, and fighting means that sometimes you win, and sometimes you lose. The Mesillos Yesharim explains that man was put on the planet to learn, to serve HASHEM, and fight the fights of life. There is no fighter in existence who hasn’t gotten knocked down. No fighter ever entered the ring without being ready to get hit. That is just part of life.

It seems that in an attempt to portray Gedolim as great, we have made them non-human – angels just barely wearing human form. While this may stem from a noble motivation, it is false, and it brings with it a real danger. If a Gadol is barely human, I can’t learn from him. After all, I am very human. I have ups and downs, moments of great inspiration, and times of doubt and questions. I fall down and need to pick myself back up. If Gadolim were such perfect angels, what connection do they have to me? How can I learn from them?

This seems to be the answer to the question on Rashi. Avram was a human being. Granted he was on a remarkable level of spirituality, but he was still a human with real feelings, real attachments, and real emotions. For him to leave his birthplace and his homeland was difficult. He grew up there. He had memories and connections there from most of his life. It was home. Was there a question in his mind about listening to HASHEM? Certainly not. But each expression was an added dimension to the test because it made it somewhat more difficult, thereby increasing his reward.

Understanding that the Avos were genuine people with real feelings, goals, and aspirations allows us to understand that while they may have functioned on a different level than we do, they were people much like us. They suffered setbacks and had difficult moments, yet they became who they were because of their powerful commitments. This allows us to use them as guideposts for our own growth, allows us to look up to them for inspiration and motivation, recognizing that their lives were much like our own. We then see them as shining stars by which we can set our own path in life.