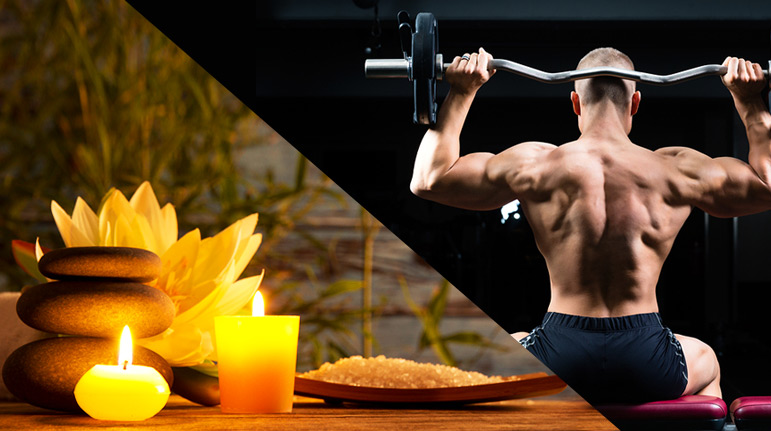 The Gym and the Spa Moshol

“Yeshurun became fat and kicked. You became fat, you became thick, you became corpulent — and it deserted HASHEM, its Maker.” –  Devarim 32:15

In Parshas Ha’azinu, Moshe Rabbeinu prophetically forewarned the Jewish people about what the future would bring. One of his statements was: “Yeshurun, you became fat and kicked.” The Siforno explains that this was an admonition directed to the Torah scholars. He says, “You lost your ability to understand the finer points of Torah scholarship. What brought this on? You turned to the physical pleasures. Because you involved yourself in material enjoyments, you lost your ability to perceive the truth. When this happened, you rebelled against HASHEM, and then dragged the rest of the nation down.” The Siforno explains this is the meaning of, “ You became fat and kicked”.

What’s wrong with a little pleasure?

This Siforno is very difficult to understand. We know that HASHEM created many and varied pleasures in this world — each to be enjoyed in the right time and in the right measure. Pleasures and enjoyment have their place; they are tools to be used. So what is wrong with the talmidei chachamim of the generation taking a little bit of enjoyment form this world? And how does that drag down the rest of the people?

This question is best answered with a moshol.

The Gym and the Spa

Imagine that you are invited to a very exclusive health club. You’ve never been there before, but you know the layout. On the left side is the spa, and on the right side is the gym. The spa is the area with the steam room, the sauna, the massage tables. It is the place where people relax. The gym is the area with the exercise equipment: weights, treadmills, elliptical machines. It is the place where people work out. They push themselves, they strain, and they challenge their bodies to the limits of  endurance.

As this is your first day in the health club, you decide you need a little break, so you go right to the spa —but by mistake you turn right and end up in the gym. “What?! What’s with all the red-faced people, grunting and sweating? What’s with all the hard work? I thought this was the place to chill, to loosen up, to enjoy?”

This is a very apt moshol for our existence. HASHEM created two worlds: this world and the World to Come. This world has its purpose; it has been ideally fashioned to allow man to grow. All of the challenges and situations that we are confronted with here are custom-made to give us the opportunity to choose, and the results of those choices become who we will be forever. The World to Come has its purpose, too. HASHEM created it specifically as a place for man to have pleasure and enjoyment. When we leave this short existence that we call life, we live in that world forever and enjoy the fruits of our labors. Whatever level of perfection that we have reached during our few short years here, we will enjoy there for eternity. This world is the gym, the place of growth. The World to Come is the spa, the place that we enjoy our accomplishments.

A person should enjoy this world

The greatest enjoyment in the human experience is growth. That is the reason we were put here, and there is a deep satisfaction that a person feels when he grows. If a person understands the purpose of life and is growing, he leads a deeply satisfying, fulfilling life. He has no need for outside stimuli to fill a void, and as such, he doesn’t have needs for luxuries and material indulgences. People who run after material pleasures are empty. A person who lacks meaning in life feels a void and needs to fill it with whatever will make him feel good for the moment. But it never works. Much like a person who hasn’t eaten in days and who tries to quell his hunger pangs by drinking water — twenty minute later, he’ll be hungrier than before. None of the pleasures of this world fill a person’s soul.

This seems to be the answer to the Siforno. The Torah sages should be the happiest people in the world. They are constantly growing, constantly accomplishing. They are changing themselves and the world they live in. How can they not be satisfied? How can they feel lacking? If this group turns to material pleasures, it is indicative that something is missing. It means that their focus is off. They have mixed up the “gym” with the “spa,” and they aren’t laboring as intensely in Torah study. Therefore, the Torah isn’t fulfilling them. Because they are too focused on this world, a further downward spiral begins that causes them not to appreciate Torah as much and not to labor as hard in it. Then they will feel even more lacking and will need to fill that emptiness with physical pleasures. Eventually, this path will cause them to rebel against HASHEM and corrupt the rest of the generation along with them. Moshe Rabbeinu was warning them that their spiritual level and the rest of the nations depend upon their keeping their focus, ever remembering why HASHEM created them.