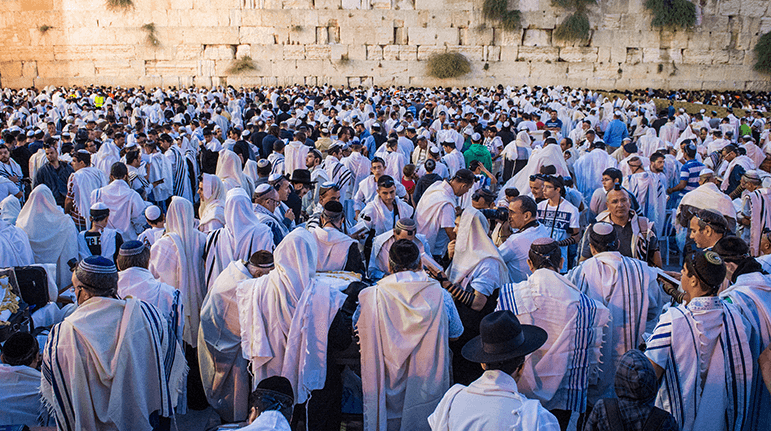 The Power of a Tzibbor

The Torah is very explicit that if the Jewish nation follows the ways of HASHEM, we will enjoy peace, prosperity, and success in all of our endeavors. We will plant and harvest abundant crops, our borders will be secure, – life will be good. Included in this is a guarantee that in battle with our enemies we will be astonishingly successful; small numbers of our weakest soldiers will chase down and annihilate far larger groups of the enemy.

Why should larger numbers make a difference?

It is clear from this Rashi that the only distinction between the two groups is in numbers. Rashi isn’t saying that the group of a hundred had more kavanah when they did the mitzvah. Nor is he telling us that they were greater people, or that they were engaged in a holier act. The only difference is that there are more of them involved. The question is: why should a larger group be exponentially more effective simply because of its size?

If Rashi were telling us that from a psychological  standpoint there is strength in numbers and the group gives chizuk to each other so that they will fight better — it would make sense. Or if because they were a large assembly of people, they were strengthening each other in the purity of their intentions and were more l’shmo, we could understand why they would be more successful. However, that isn’t the difference. It is simply the fact that there are more of them. Why should the same people, on the same madgregah, doing the same mitzvah, be so many more times successful simply because they are a larger group?

The answer to this question lies in understanding the systems that HASHEM created and gave over to man.

A change in the world order

On August 6, 1945, the Japanese city of Hiroshima was obliterated. Never before in the course of history had man unleashed so much power and destruction in one act. For many, it took a long time to comprehend. How was it possible to destroy an entire city? Man had been using explosives for thousands of years, but nothing of this magnitude. There were five hundred pound bombs that could destroy buildings, one thousand pound bombs that could level an apartment complex, but how did they wipe out a city? Miles and miles of rubble and destruction — everything leveled. “How large can the bomb possibly be? How many explosives can you possibly pack into one plane?”

The reason that it was so difficult to comprehend was because the force was derived from a completely different set of principles and didn’t work with the old rules. HASHEM had allowed man to harness the power of the atom — an energy source more than a million times more powerful than conventional weapons. It was a whole new reality, and the old frame of reference had little bearing.

So too, in the spiritual world, HASHEM has created certain forces that are powerful and magnify the efforts of man a thousand fold or more. When a sofer takes parchment and ink, writes the parshios with the right intentions, and inserts them into properly prepared batim, an object has been created. That object is far greater than any of its parts.

A pair of tefillin is one of the holiest objects in creation. The parshios themselves had a certain level of kedsuha; the batim themselves prepared l’shmo have some holiness to them. But when all of the parts are brought together, it creates a new entity that is exponentially more holy and potent than the sum of its parts. A kosher pair of tefillin has been created. The object itself is now kodesh, and when man wears them, he harnesses powerful forces that affect both this world and the upper worlds in ways that are difficult to imagine.

So too, when Jews gather together to perform a holy act, it is no longer ten or twenty individuals; it is a new entity – a tzibbur. That tzibbur is far more powerful than the sum of all of its members. It is now in a new category and taps an energy source that is infinitely more powerful than any of the individual members can muster. The impact and effect that it brings about is far greater and it can now accomplish far more than any of its members acting alone.

The power of a tzibbur

This seems to be the answer to this Rashi. Much like a kosher pair of tefillin or a complete sefer Torah, a hundred Jews acting in unison reach a new plateau of effectiveness, multiple times that of the individuals involved. They have tapped the force of the tzibbur. A hundred will chase ten thousand.

This concept has great relevance to us in helping us be more successful. The Gemarah (Tannis 8a) tells us that while all prayer works, for it to be heard, it must be said with an outpouring of emotion. Only when tefillah comes from a deep devotion and is expressed with sincere, powerful intention will it move mountains… unless it is said b’tzibbur. Then, with or without this deep level of Kavanah, it will accomplish its intended purpose.

It is clear from the Gemarah that the same prayer, the same intention, and the same person will find much greater results from his davening because has joined a minyan. He may not have changed, but his circumstances have. He is now in a assemblage that has joined together, and its efficacy far outweighs that of all the individuals combined. By sharing in the merit of that group, his prayer will have a far greater effect. He has put the power of a tzibbur to work.