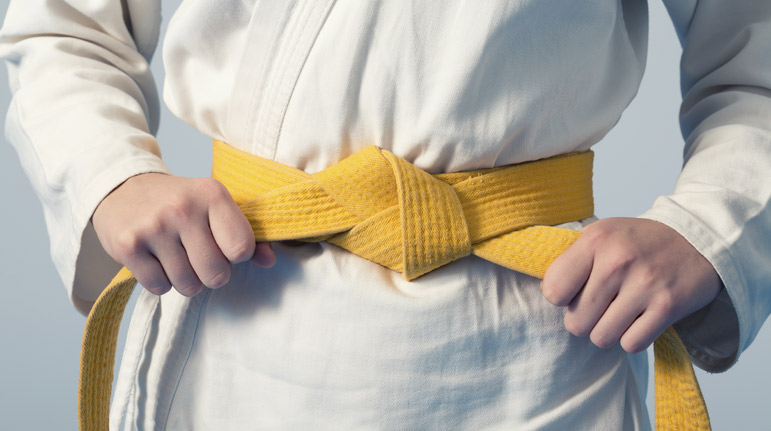 A Yellow Belt in Five Styles

Having values that are constantly changing leads us nowhere very fast.

Probably the greatest cost to a person living life without a clear purpose is that he won’t reach a fraction of his potential. He will become like the young man who was a yellow belt in five styles of karate.

When this fellow was in grade school, he was fascinated with the martial arts, so he convinced his parents to let him study karate. He enrolled in a school and learned the stances, the kicks, and the punches. He was a diligent student, and after about a year of training, he was ready for his yellow belt test, the first rank. He took the test and passed.

Shortly after that, his family moved to another city, but the only karate school he could find there practiced a different style of karate. So he began again from the basics, with new stances, new kicks, and new punches. Again he progressed well, and again he took his yellow belt test — now in the new style — and passed.

Soon the time came for him to go away to high school. In that city, he again searched for a karate school, and the only one he could find taught a third style of karate. So he had to start from the basics with the new stances, new kicks, and new punches. And in this style as well, he was awarded a yellow belt. Midpoint through high school, he switched yeshivahs, and began the same process again.

At the end of five years of disciplined training, this young man had attained the rank of yellow belt in five styles — a beginner! Had he spent the same amount of time and effort in one style, he would have attained the rank of black belt — a master. The ironic part was that he applied himself and worked hard, but because his focus kept changing and he had to start from the beginning over and over again, his advancement was stymied. At the end, he remained a rank beginner.

This story has a message. Most people spend their lives with changing priorities. That which is important at one stage becomes insignificant at another. To a young boy growing up in America, sports are king. That is what really counts in his world. But that doesn’t last; it is soon replaced by friends and being popular. As he matures, grades and what college he gets into become the measure of success. Within a short while, his career and making money are all that really matter. Yet this also passes, and shortly, he will trade away huge amounts of his wealth to build his reputation. As he nears retirement, his health and his future nursing home become his primary concern.

Throughout life, whatever is precious and coveted at one stage becomes devalued and traded away when new priorities take over. The currency is constantly changing. The result of this is that while someone may do well at each stage in life, the totality of what he accomplished may not amount to much. He became a yellow belt in five styles.

Where Are You Headed?

One of the costs of not asking the fundamental questions of life is that people end up in some rather sad situations. Often, at the end of a person’s life — when it is too late to do anything about it — he has bitter regrets about the way he spent his time.

The Mesillas Yesharim teaches us that the first principle of leading a successful life is knowing what you want out of it. Know where you are headed. Know your currency, know your value system, and then set goals in accordance with it.

But therein lies the problem. How does a young person know where life will bring him when he is older? Which human is wise enough to know where he will be in twenty years? How can anyone know what he will consider important and valuable when he is in a different stage of life?

He is telling you, based on his five-year-old understanding of life, what he values and considers important. He can’t tell what he will value when he is older. He has no way of knowing what he will consider important and significant then. He is telling what he wants to be now. And according to his current understanding of the world, he would like to be Superman, Batman or a UPS driver.

In this sense, one of the most difficult things for any human to do is to set a life course that will make him happy thirty years in the future. How can anyone possibly know what will be important to him then? How can we know what we will consider successful then?

The Mesillas Yesharim tells us that Hashem didn’t just create man and leave him to figure it all out. Hashem didn’t design an entire world for man, put him into it with a mission, and then stand aside saying, “But I am not going to tell you what it is. It’s a secret. Go figure it out.”

Hashem gave us a clear, definitive blueprint, an exact guidebook with clear directions on how to live our lives and the underlying reasons for it. The key to true success is to open that book, learn its words of truth, and mold our lives accordingly.