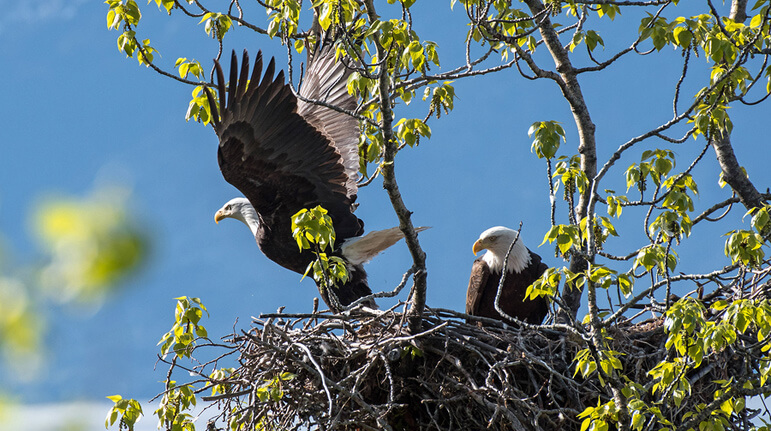 One of the questions that a person should train his tongue to ask is who taught you to do that?  Who taught you that?  And what I mean by that is if a person will look out into the wild kingdom and ask the question who taught you to do that, you might find some wondrous things going on.  Let me give you an example.  If you watch a crow, a falcon, any large winged bird take flight you’ll find something amazing.  Before the bird flaps its wings it does a vertical jump.  It jumps off the ground and only once it’s done a nice vertical leap does it begin flapping its wings.  Now, why is that?  Why doesn’t the bird just begin flapping its wings on the ground?

Well, the answer is if it were to extend its wings and flap while its feet are on the ground it would smash its wings into the ground because the wings are much longer than its legs.  It would break its wings.  Hence it will always do a vertical leap and it’ll jump up only once it’s cleared the ground.  Then it’ll begin small strokes with its wings and then larger and larger as it gets higher off the ground.  Only when it’s well off the ground will it take full beats, full flaps of its wings.  And here’s the question: Who taught the falcon to do that?  Now maybe you’ll tell me the mother bird obviously teaches the baby how to fly, right?

Well, not quite so simple.  It takes a German scientist to think of this particular experiment but what these German scientists did was they took two broods of pigeons.  One they allowed to grow up in the nest as it normally would and the other, at birth they took these pigeon babes and placed them within a tube so that the pigeon could not move its wings.  And they waited for the free brood to grow.  As they grew in about a month or whatever the time was when the babes from the free nest were able to fly and actually left their nest the scientist then went to the front of the tube and blew out, expelled the bird.  The bird which had spent its life now in that tube now found itself in the air and instantly began beating its wing I proper coordination and instantly began flying.

If you’d like to know who taught the baby bird to jump, who taught it to fly, the answer is it wasn’t taught.  Invested within it is all of the wisdom that it needs for its survival as well as the survival of its species.  And when a person begins studying the wild kingdom he sees such wisdom, such wisdom manifest and says to himself, “What a wondrous creation.  If this is the creation what does it tell me about my creator?”  And by studying the wild kingdom a person could get an eye glimpse to the majesty, the wonder, and the wisdom of its creator.