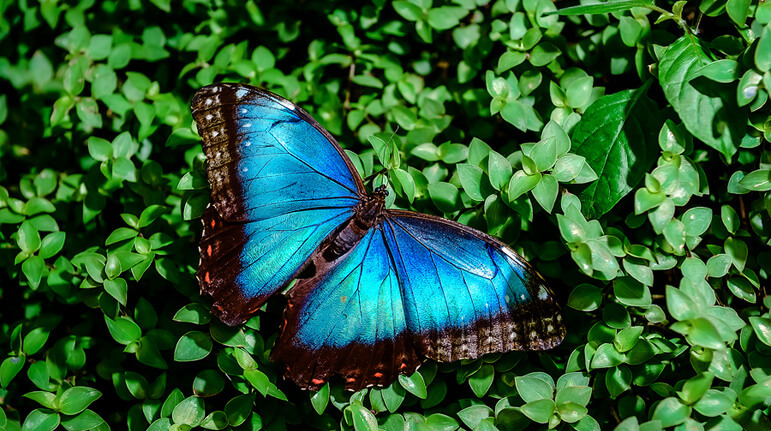 When my children were little I took them to then the newly opened butterfly conservatory on the entrance to Canada.  It was a beautiful conservatory.  You’d walk in there and 2000 butterflies would fly about.  They’d land on you, you’d be able to look at them, you’d be able to study them, and it was really wondrous.  It was a few thousand square feet and it was humidity controlled and they had various things to make sure that the butterflies would exist and you’d see them eat, you’d see them rest, and it was a wonderful experience.  At a certain point I realized that something was lacking from this exhibit.  I saw pupa, meaning to say the chrysalis, the actual caterpillar in the little womb.  I saw butterflies but I didn’t see any caterpillars.

Now, the life space of a butterfly starts with the egg.  The egg hatches and as the caterpillar it’s an eating tube, it will eat for two weeks, maybe a month.  Then it spins a cocoon around itself, hangs upside down, and then it begins forming its wings and et cetera.  Then it comes out of that cocoon and out flies a butterfly.  I saw the cocoons; I saw the butterflies but no eggs and no caterpillars.  So I asked one of he curators, “Why is it that there are no caterpillars here in the exhibit?”  He said, “Caterpillars?  They’d eat us out of house and home.  We couldn’t possibly have enough vegetation here to keep them fed.  I said to myself, “That’s very intriguing.”  Modern man spends tens of millions of dollars to create an exhibit, climate controlled, everything orchestrated with curators to provide every need but they can’t keep one species — a butterfly — in its natural formation

There are 2.3 million square miles in the African tropical rain forest.  Who keeps he echo systems going?  Who keeps things arranged?  Who provides enough vegetation, who provides enough rainfall, who provides just the right amount of acid and quite the opposite, not too much.  And when you study what it takes to keep one species alive and then you recognize that there aren’t one or two species in the world that we live in scientists now approximate that there are about 10 million species of living things each with its own needs.  Each with its own food substances.  Each with it’s own requirements and you study and ecosystem that somehow is kept in existence you begin to say, “This is astonishing.”

If you don’t understand let’s focus on one point.  If you own a business, imagine you have a business that’s successful and you have 15 employees and one day you bring your employees in and you say, “Gentlemen, ladies, I’m going to take a little vacation for three month and I’m going to Greece, and I’ll see you guys.  Take care of what’s going on.  Now, assuming you have good teams in place, assuming you have good systems and good incentives when you come back in three months you might find your business intact and you might not.  What if you left it for two years?  Forget it.  You wouldn’t come back to a business, you’d be bankrupt.  Because any business requires someone making sure that the parts are working, systems are in place.

Well, here’s the question — who’s watching the system?  How’s controlling the weather?  Who’s controlling the balances?  Who’s keeping the world that we see where it is?  And if you think that it just continuing on its own put a few fish in an aquarium and leave it for a month.  And you’ll find the water gets cloudy and dark.  In another month the fish die because without someone supervising, without someone maintaining it, it doesn’t exist.  And when you see this complex ecosystem called the world, the food changes are so interdependent with so many species of animals that have such exact requirements.  And everyone is met.  You should step back and say this is wondrous.  A great, magnificent creator brought this into existence and maintains it because without maintenance it would all disintegrate, it would atrophy.  When I see this world continuing, when I see it existing, I see the creator who brought it forth and I see the creator who maintains it keeps it exactly as it’s supposed to be.