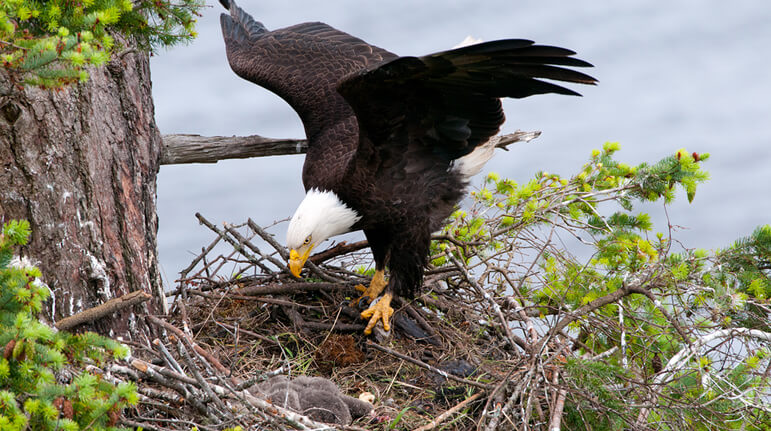 Insect infestation is something that plagues farmers, that plagues wholesalers, the house wife that goes to buy lettuce is bothered by it because the reality is that we find bugs in our vegetables, in our lettuce, we have to check them and it becomes a very major annoyance.  When I was a boy growing up that wasn’t the world I lived in.  You went to the store, bought a head of lettuce and you knew fully well that there wasn’t a bug to be found anywhere there.  You could buy all types of vegetables without checking.  There was no insect infestation.  Why is that?  Because many years ago there was a chemical known as DDT that was then the insecticide that was being used and it was incredibly effective at killing insects.  The farmer brought the produce to market insect free.  However, something began happening that it took scientists many, many years to figure out.

There are various species in the wild that were declining.  One in particular, the bald eagle.  The bald eagle that had been a robust, it was a symbol of our country and had robust populations throughout the land.  Suddenly the populations were dwindling and dwindling and no one knew why.  Now, scientists were aware of dangers of DDT and for various reasons they stopped the production, laws were passed, and DDT was not allowed to be used as an insecticide.  They began using much less effective but much less potent insecticides and when DDT was banned some interesting things began changing.

For some unknown reason many populations of animals began rebounding.  The bald eagle went from bring in grave danger to now being far more common and eventually it was taken off the endangered species list.  The populations began expanding and expanding and it took scientists a long time to recognize the why behind it.

You see, what had been happening was the following — the farmer would spray DDT on his crops and in fact the DDT killed the insects.  But trace elements of the DDT would get into the ground and the rainwater would carry it away and those trace elements of the DDT would end up in the lake and the streams.  The fish in those lakes and streams would swallow the water including those very miniscule amounts of DDT.  The eagle who loves to eat salmon, often time it would eat salmon that were infected with miniscule amounts of this DDT and that created the problem.  You see, when the eagle would eat this fish that DDT would get into its body and when it would lay its egg the egg shell was just slightly too thing hence when the eagle would sit on the egg to incubate it and keep it warm it would crack the egg and the next generation wouldn’t come about.

Once the DDT was stopped the eagles no longer ingested it.  They no longer have the weakening, the thinner shell.  They produce fully robust eggshells and the next generations were born.  The eagle population responded and rebounded very beautifully.

Now here’s the very interesting point.  The egg shell is the geometrically perfect shape to keep the baby inside, keep the weight of the eagle supported and yet gently spread out that weigh.  It’s that the ideal shape that will allow a heavy mother to sit on the egg without crushing it.  But the eggshell has to be the right thickness.  With the DDT, the body of the eagle, the eggshell was jus ta tad too thin and even though it was an ideal shape nevertheless he other eagle crushed the eggshell.

Once the DDT was removed the body of the eagle began producing the correct thickness of he eggshell, and now in fact, the eagle has rebounded.  But here’s the point.  Do you know how to measure the thickness of an eggshell?  If you have a micrometer that measures microns you’ll find that eh difference between a proper egg shell and one that’s too thing is not a hair breadth, not a fraction of a hair breadth.  It’s almost not noticeable to the human eye.